It is possible to buy tickets for the Alhambra for 0,01 €
FixedPublic
Actions

Assigned To
Authored By
Tags
Subscribers

There are several hidden input fields in the page where tickets for the Alhambra can be purchased which, when manipulated in a specific way, can change the price that the system thinks a ticket is worth, thus allowing to lower its price.

This will leave all the hidden input elements like this: 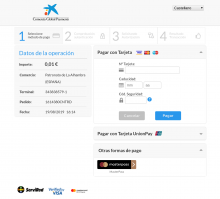 This vulnerability can be used obviously to get tickets for the Alhambra for 0,01 €.

It seems like the system saves the ticket price in the HTML structure of the site, and when a ticket is added, this value is sent back to the server and is used to compute the total price. In order to fix this vulnerability issue, the server-side code should be rewritten in order to not trust the ticket price saved in the HTML code, but get it directly from the database where the prices are set (or wherever it is saved), but never trusting user input.

This bug is subject to a 90 day disclosure deadline. If 90 days elapse without a broadly available patch, then the bug report will automatically become visible to the public.

I thought of sending them another email to make sure that they received the vulnerability details, but the university course started, and as this is the busiest semester I've had in my university life, I completely forgot to contact them again until now that the disclosure deadline elapsed. I'll comment this with more detail in the bottom section of this comment.

That being said, I have tried to reproduce the vulnerability right now via the reproduction steps outlined in this report, and step 10 fails, because instead of redirecting to the credit card details screen, the web shows an error stating that something went wrong. Because of this, I've sent an email to IACPOS in order for them to confirm to me whether they solved the vulnerability or not.

Unfortunately I didn't realize that the disclosure deadline was about to elapse, and so the day that it was exceeded this report was published automatically by Douglasbot. Some time after I woke up I realized that, and I quickly changed its visibility back to restricted because I hadn't still contacted the vendor to confirm that the vulnerability was fixed. The following day, the vulnerability was automatically published again because I forgot to change the deadline, and so I had to reverse that too.

This was all my complete fault and it is unacceptable, so I would like to apologize. In order to prevent this from happening again in the future, I will make Douglasbot send me email notifications several days ahead of the vulnerability disclosure deadline, so I'm fully aware that the report will be automatically published and I'm given the opportunity to stop it in cases like this, in which I didn't proactively contact the vendor several times to ensure that the vulnerability got fixed.

I haven't received any response, so I just sent them an email saying that I'll set this report to be autopublished in a week (which means setting the deadline field to 154 days), given that I verified that the issue was fixed.